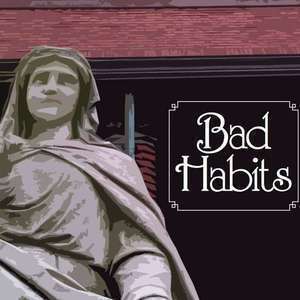 At Our Lady Of Perpetual Sorrows, the balance has been disrupted. A tell-all book has just been anonymously released telling the secrets the order, and a new Mother Superior has come in to get to the bottom of the scandal. But she's been seen talking to a large rodent and a man in a top hat—and something strange is happening in the basement with tin foil. And have you noticed how big the tulips are this year? In this episode, players Keith Baker, Molly Lewis, Jenn Ellis and Jeremiah Shepersky join your host Angela Webber in playing "Bad Habits," a playset set in a convent in Punxsutawney, PA.

and your host Angela Webber (@angelamwebber)